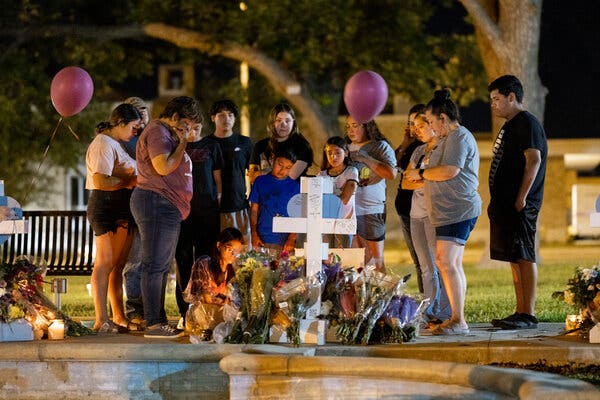 Relatives of Alexandria Rubio, a 10-year-old victim of the shooting at Robb Elementary School in Uvalde, Texas, mourned their loss on Friday.Credit…Ivan Pierre Aguirre for The New York Times

The grotesque toll of gun violence is again being debated in Congress. As Luis Ferré-Sadurní and I reported over the long weekend, states are not holding their breath.

Particularly this state: In ways that have tended to be underreported, California has significantly lowered gun deaths, Dr. Garen J. Wintemute, an emergency room doctor and longtime firearm violence researcher, told me this week.

“For the last 20, maybe even 25 years — except for the two years of the pandemic, which have increased homicides and suicides across the country — our rates of firearm violence have trended downward,” said Dr. Wintemute, who directs the Violence Prevention Research Program at the University of California, Davis, Medical Center in Sacramento. “And this has been at a time when most of the rates in the rest of the country have gone up.”

California’s rate of firearm mortality is among the nation’s lowest, with 8.5 gun deaths per 100,000 people in 2020, compared with 13.7 per 100,000 nationally and 14.2 per 100,000 in Texas, the Centers for Disease Control and Prevention has reported. And Californians are about 25 percent less likely to die in mass shootings, compared with residents of other states, according to a recent Public Policy Institute of California analysis.

I asked Dr. Wintemute how California is different. Here’s a lightly edited excerpt from our conversation, which took place on Memorial Day after his emergency room shift:

Just a couple of weeks ago, California had a mass shooting. By what measures are our policies a success?

You have to look at it on a population basis. We do have more mass shootings in California, but we’re also by far the largest state. I looked a while ago at the rates of firearm violence across the 21st century — homicide and suicide together — and the rest of the country was up, but California’s rates were so far down that the average was flat.

We always hear that nothing works, that even California’s strict gun laws are ineffective.

That’s because we evaluate policies one at a time, in isolation. The results for one policy might be mixed or even negative. But what California has done over a number of decades has been to enact a whole bundle of policies that I think work in synergy, to measurable effect.

It sounds like the “Swiss cheese model” public health experts have used to address Covid.

Yes. The idea is to prevent the holes in the policies from lining up. But if we rank the states, California’s rate of firearm violence ranks 29th out of 50 states for homicides and 44th for suicides.

California has done a lot to prevent high-risk people from purchasing firearms. We’ve broadened the criteria for keeping guns out of the hands of people who pose a danger to themselves or others due to mental illness. If you’re convicted of a violent misdemeanor in California, you can’t have a gun for the next 10 years; that offense has to be a felony in most states.

We require background checks, and not just from licensed retailers; in most states, purchases from private parties require no background checks or record keeping of any kind. We have a system, that we’re evaluating now, for getting guns back from “prohibited persons” — people who have been convicted of violent crimes or who are facing domestic violence restraining orders. And we enforce these policies, unlike a lot of other states.

In the early 1990s, cheap handguns — “Saturday Night Specials” — were almost entirely manufactured around Los Angeles. It was a few companies making upward of 800,000 cheap handguns a year. So the state imposed standards for design and safety. One of the companies has since gone to Nevada. The rest went belly-up and no one else has come in to fill the gap.

Every time California sets a new standard, the gun industry tries to outwit it. Unregulated ghost guns have become immensely popular here, precisely because we’re such a tightly regulated market. And the state program to recover guns from prohibited people has never had the level of funding it needs to do the whole job — there are only about 40 trained agents for the whole state and a backlog of at least 10,000 people whose guns need to be taken.

Overall, what could the rest of the country learn from California?

The lower the prevalence of ownership, the lower the rate of firearm violence — that’s been one of the most robust research findings for decades. Rates of gun ownership are lower here, in part because of this bundle of state measures. In the United States overall, something like 25 percent to 30 percent of individuals own guns. In California, it’s about 15 percent to 18 percent.

If you read one story, make it this

In this lovely tale of the city by Tim Arango, a plan to build luxury apartments in Los Angeles is threatening an oak that dates to the 1936 Olympics — and that bears witness to a forgotten chapter of Black history.

The rest of the news

Today’s tip comes from Ann Wride, who recommends the seaside town of Cambria:

Tell us about your favorite places to visit in California. Email your suggestions to CAtoday@nytimes.com. We’ll be sharing more in upcoming editions of the newsletter.

Redwood sprouts at the base of redwoods burned in the CZU Lightning Complex fire in Big Basin Redwoods State Park in 2020.Credit…Max Whittaker for The New York Times

And before you go, some good news

Nearly two years after a massive wildfire tore through Big Basin Redwoods State Park in the Santa Cruz Mountains, parts of the park are set to reopen soon after the Fourth of July, The Los Angeles Times reports.

Thanks for reading. We’ll be back tomorrow.

Soumya Karlamangla contributed to California Today. You can reach the team at CAtoday@nytimes.com.

A Slap Could Sting the Smith Family Brand

Benedict Admits Being at Meeting About Priest Accused of Abuse

For 2nd Time This Week, a Deadly Crash of a Migrant Boat Off Greece