It was 2015, and I was an intern at a literary agency with offices near Union Square. My duties included reading manuscripts and fetching my boss his morning coffee.

His requests were unpredictable. A cappuccino with soy milk one day, a latte with almond milk the next. A full week of almond cappuccinos followed by several days of soy lattes. For a brief stretch, two soy cappuccinos poured into one big cup, then back to almond lattes.

I became a regular at a coffee shop around the corner, where the baristas quickly learned my face but, of course, could never master my order.

“Almond capp today?” a server would ask expectantly after several days of my having ordered exactly that.

No, I would answer apologetically. Soy latte.

One morning, as I was paying, the manager looked at me.

“Oh, these are for my boss,” I said. “I have no idea how he makes the decision.”

I laughed, but the manager seemed concerned.

“You have to get him coffee?” he asked. “Does he let you get anything for yourself?”

I paused. It had never occurred to me to ask.

Back at the office, I handed my boss his drink and walked across the hall to my desk. As I settled into the day’s reading, I sipped carefully from the large tea the manager had brewed for me, no charge.

When I was pregnant with my first child, I took the subway to Midtown every day from my home in Brooklyn. I think I was offered a seat about half the time.

One day, I got on the train after work and there were no seats. I was ready to stand the rest of the way home.

The conductor happened to stick her head out of the cab. Seeing me, she stepped all the way out and announced in a loud, clear voice to the entire car that the train would not be moving until someone offered up a seat.

Immediately, there was a shuffling and someone stood so I could be comfortable for the trip home to Brooklyn.

Thank you to that conductor.

An older woman boarded the Q60 bus at one of its stops along Queens Boulevard. She was pulling a plum-colored suitcase and a striped tote bag behind her.

“I’m going to Florida,” she announced to no one in particular as she walked down the aisle. “By myself! I don’t care. I hate how cold it gets here. I’ll deal with the humidity.”

I thought it was a bit odd for her to be grousing in the middle of July about how cold New York could be. In any case, I think she found a seat.

“Florida — that’s where I’m going,” I heard her say emphatically from the rear of the bus.

I was sitting in one of the single seats near the window. Two other older women were standing near me, talking matter-of-factly about a friend’s dog that had to be put down. They pursed their lips and shook their heads in a rueful manner.

Another older woman who was sitting near the driver held her right arm high above her head and waved. I couldn’t tell whether she was saying hello or goodbye or that she needed help.

It was one of those June evenings when it was still light out at nearly 9 p.m.

Returning to my West Village apartment building, I unlocked the front door and almost bumped into a neighbor who was standing in the entryway with a package in his hands.

We exchanged hellos, and he told me the package had been delivered to our building by mistake. He held it out, and I saw that the address was close to ours but had a few different numbers.

“I’m going to walk over there, ring the buzzer and drop it off,” my neighbor said.

“Why not catch the delivery person next time they come around and return it to them?” I asked.

“It’s beautiful outside,” he said. “I could use a little walk, and whoever this is supposed to go to might really appreciate it.”

This time, I hesitated.

“Who knows,” my neighbor continued. “It might make their night. Or mine.”

After a fun July 4 barbecue with friends, my fiancé and I were driving home to Brooklyn when we came up behind a van that was pulled up at a stop sign.

We waited nearly half a minute, but the van did not move. It was getting late and we had to run the puppy out, so my fiancé honked once.

By now, we were impatient. We drove around the van, pulling up cautiously to the stop sign from the driver’s side.

Looking in the van, we saw a man with his eyes closed. He was vigorously playing a flute.

Read all recent entries and our submissions guidelines. Reach us via email diary@nytimes.com or follow @NYTMetro on Twitter.

U.S. and Russia Will Discuss European Security, but Without Europeans

What to watch for on Monday at COP26. 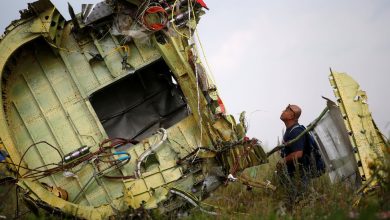 The MH17 case: A timeline of tragedy and conflict.