I like waking up before the chain-smoker who lives two floors below me. Sipping coffee, I hear birds planning their day, watch the sunrise reflected in the highest buildings on Central Park South and breathe the freshest air of my day.

I often wish the morning hour would last longer, just that first one after I wake up. Serene as it is, a lot takes shape in that time.

Birdsong is the first sound to greet me. It is spring as I write this. The race to find a companion, build that fragile home of twigs, is in full swing.

Those noisy efforts, in that hour before dawn, almost drown out the city’s yawning wakefulness. Almost.

The birds work at the same frenzied pace throughout the day — truly dawn ’til dusk. But once the city wakes, its machinations drown out their spring fever.

The real early birds catching worms are outfitted with yellow safety vests, hard hats, tool belts. Calloused palms savor coffee and that first cigarette before clocking in, climbing down, or up, into the defined roles offered by vertical New York.

Lingering over that second cup, I think-write letters I’ll never send, some so heartfelt and hopeful I’m sure my intentions will make an impact. Once I’m up and out the door, the next 14 hours will speed by, my efforts to be a useful participant in city life often successful.

Traffic wanes, and the city settles. I settle, too, grateful for another day here.

On the Metro-North From New Haven

Thank God the rain held off, thank God for May,
the good coffee, the shuttle that came on time,
a window seat facing southeast with a double wall outlet,
the way the penciled eyebrows of the woman across from me
rise like index fingers bowing to each other,
the way the restroom door slides shut without a hand,
the way the man in athletic black bends low over his phone
as if paying a deep obeisance to an unseen deity,
perhaps the god of thunderbolts and rain,
or could he be withdrawing money from his 401(k)
to pay the next installment on his daughter’s braces,
the way the car becomes a quiet keep as it coasts
into Old Greenwich or is it Riverside or perhaps Cos Cob,
Cos Cob the town where all good stuff happens.
At last we unpack at Grand Central Terminal
like avocados perfectly ripe and ready to eat.
Under a Grecian sky I gaze up at Aquarius of Troy,
Zeus’s anointed water boy tilting a gold cup,
both hands cradling its bowl as he pours stars all over us.

I was on the B train riding to work with a friend. We were chatting when the woman sitting next to us leaned over and asked us to stop.

“I’m trying to read my book.” the woman said.

“This isn’t a library,” my friend responded.

“No one else on the train is talking,” the woman said.

“No one else knows anyone,” my friend said.

By now, we had the attention of other riders sitting near us. My friend began to canvass them: “Do you know him? Do you know her?”

They all shook their heads.

After a pause, my friend and I quietly returned to our conversation.

When we got to Atlantic Avenue, the woman rose from her seat and went to the door.

As she was leaving the train, she turned back toward us.

It was 1959, and I was in the single, small elevator of a narrow, eight-story building at 18 East 50th Street, on my way to work at George Nelson & Associates, a design firm that occupied the sixth floor.

The elevator door closed, and six of us, men and women in the business attire of the day, stared up at the lighted numbers showing our destinations.

Suddenly, the elevator stopped between floors. Someone in the front pressed the button panel a few times, but nothing happened. A long minute or so passed.

Finally, a young woman who had just started as a receptionist in our office broke the silence.

“I guess we should all introduce ourselves,” she said cheerfully.

Everybody laughed and made eye contact. We were about to speak when the elevator started up again. There were no introductions, but I think we all exited with lighter hearts.

I was leaving the Union Square subway station when I saw a young woman who appeared to be in her 20s running furiously toward a well-dressed older woman from about 30 yards away.

The younger woman was causing quite a commotion, and people in the station were looking on with a mix of worry and curiosity.

When she reached the older woman, she was out of breath.

“Excuse me,” she said excitedly, “but where did you get those shoes?”

Read all recent entries and our submissions guidelines. Reach us via email diary@nytimes.com or follow @NYTMetro on Twitter. 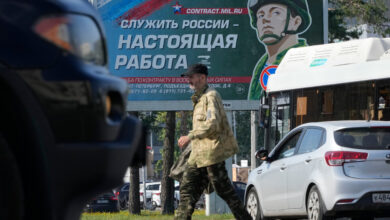 In Georgia, a G.O.P. Primary Tests the Power of a Trump Vendetta