Ten days into a volcanic eruption on the Spanish island of La Palma, a pyramid formed on Wednesday just off its coast, after the lava flow started pouring into the ocean.

The local authorities called on residents on Wednesday morning to keep their windows shut because a mix of toxic gases and small particles may be released when molten lava comes into contact with cold water. Scientists have also been warning that the chemical reactions between lava and water could cause powerful underwater explosions.

The lava entering the water should be treated as “a very dangerous moment,” said Ángel Víctor Torres, the regional leader of the Canary Islands, an island grouping off northwestern Africa that includes La Palma. 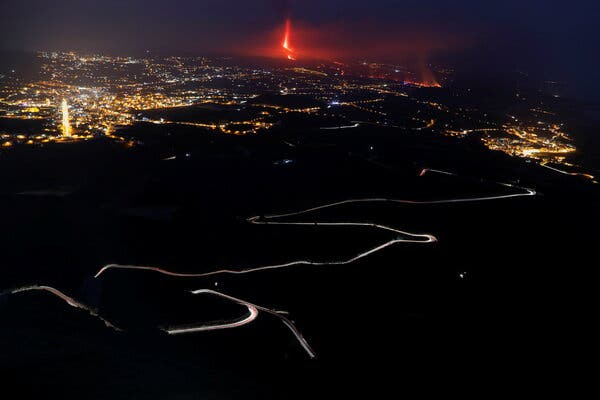 Lava is seen from Tijarafe, in the northwest of the Spanish island of La Palma, on Sunday.Credit…Jon Nazca/Reuters

The eruption began on Sept. 19 in the Cumbre Vieja nature park, a thinly populated area of La Palma, on which 85,000 people live. Still, it has forced over 6,000 residents to evacuate, as the lava and fire cut a path of destruction that swept away more than 500 houses. While banana plantations and other areas of farmland have also been wiped out, there have been no reports of deaths or injuries.

Scientists said it remained unclear how long the eruption would last. Over the past 10 days, the volcano has released more than 50 million cubic meters of lava, which is a greater volume than in the three weeks of the previous eruption on La Palma, in 1971.

The lava flow reached the water after making an unpredictable journey toward the ocean, at one stage almost coming to a halt in an area of flatter terrain. Along the way, there were also several smaller earthquakes, and new vents were carved up from which lava escaped. Last weekend, La Palma’s airport had to shut briefly because ash made it impossible to guarantee visibility for pilots.

With the lava finally flowing into the ocean, “The main concern now is the production of chloride clouds that may impact the air quality and affect the surroundings,” Arnau Folch, a volcanologist and professor of natural hazards at Spain’s National Research Council, said in a telephone interview. “It is quite a complex situation, with many hazards occurring at the same time.”

The pyramidlike structure off La Palma’s coast is expected to continue growing as more lava solidifies. In the 1971 eruption, the surface area of La Palma grew by about 5 percent, Mr. Folch said.

On Wednesday, Mr. Torres, the regional leader, told Cope, a Spanish radio station, that residents of La Palma would struggle to come to terms with what they had lost in the eruption. Since lava started to spew out 10 days ago, “The whole of the Canary Islands has slept very little, including those on La Palma seized by fear and deep sadness,” he said.

On Tuesday, the Spanish government allocated 10.5 million euros — over $12 million — to help La Palma recover. About half is to pay for new houses for those whose homes were destroyed in the eruption.

A view on Tuesday from El Paso, another village near the volcano where evacuations were ordered. Credit…Jon Nazca/Reuters
Tags
Flow La Palma Lava Reuters Sai̇d

In ‘African Origin’ Show at Met, New Points of Light Across Cultures

Has Covid Cost Australia Its Love for Freedom?