HAMBANTOTA, Sri Lanka — The international airport, built a decade ago in the name of Sri Lanka’s ruling Rajapaksa family, is devoid of passenger flights, its staff lingering idly in the cafe. The cricket stadium, also constructed on the family’s orders, has had only a few international matches and is so remote that arriving teams face the risk of wildlife attacks.

And then there is the port, the biggest of all the monuments to the Rajapaksas, a white elephant visited almost as much by actual elephants as by cargo ships before it was handed over to China in the face of impossible debt.

As Sri Lanka grapples with its worst ever economic crisis, with people waiting hours for fuel and cutting back on food, nowhere is the reckless spending that helped wreck the country more visible than in Hambantota, the Rajapaksa family’s home district in the south.

This enormous waste — more than $1 billion spent on the port, $250 million on the airport, nearly $200 million on underused roads and bridges, and millions more (figures vary) on the cricket stadium — made Hambantota a throne to the vanity of a political dynasty that increasingly ran the country as a family business.

The frenzy of building on borrowed money, with little hope of immediate return on the investment, was in essence the payoff for the family’s triumphant declaration of victory in 2009 after a three-decade-long civil war against the Tamil Tigers, an insurgency that had taken up the cause of discrimination against the ethnic Tamil minority.

With Mahinda Rajapaksa, the president, then at the peak of his powers, he did what many nationalist strongmen do: erect tributes to himself. Cash wasn’t a problem at the time, as Sri Lanka was finding international good will after ending the war and China was emerging as a willing lender around the globe. 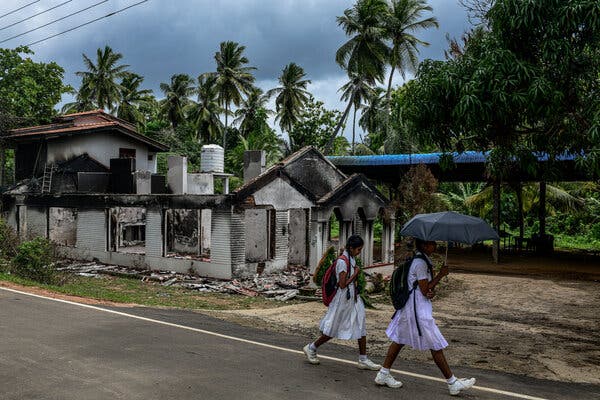 Angry residents of the Hambantota district burned the homes of politicians allied with the Rajapaksas.

Police officers outside the Carlton House, Mahinda Rajapaksa’s official residence in the town of Tangalle.

That’s now all gone. Sri Lanka is an international basket case whose foreign reserves — which once stood at over $6 billion under the Rajapaksas — have dwindled to almost nothing. The collapse is partly a result of the loss of tourism during the pandemic, a problem made worse as war has kept away many of the Russians and Ukrainians who used to visit in large numbers. But the family’s economic mismanagement and denial of festering problems have also contributed mightily.

With food prices rising, electricity often cut and lifesaving medicines scarce, protesters have pushed Mr. Rajapaksa, 76, out of his latest position — prime minister — and are demanding that his brother Gotabaya, 72, give up the presidency.

This month, after Mahinda Rajapaksa’s supporters attacked peaceful protesters in the capital, Colombo, angry residents in Hambantota went after the symbols of grandiosity and privilege that dot the district.

Local citizens who might once have supported the Rajapaksas for their ardent Buddhist Sinhalese nationalism now swarmed the family’s mansions, pelting them with stones and smashing windows. They destroyed monuments built in the Rajapaksas’ honor and set ablaze the homes of supportive lawmakers accused of amassing wealth and hoarding fuel as the nation suffered.

Just outside the private residence of Mr. Rajapaksa, the Carlton House, they tied ropes to a gold-colored statue of his father, D.A. Rajapaksa. When they couldn’t drag it down, they dug under its feet until it collapsed. And around the corner from the family’s sprawling ancestral estate, they torched the museum memorializing the resting place of the patriarch and his wife.

“I am very sad about it,” said Kapila Gamage, a 42-year-old mechanic and supporter of the Rajapaksas. “Whatever the politics, they shouldn’t have done this to their parents’ resting place.”

Protesters burned a museum at the resting place of D.A. Rajapaksa and his wife in Hambantota.
“I am very sad about it,” said Kapila Gamage, a 42-year-old mechanic who supports the Rajapaksas. “Whatever the politics, they shouldn’t have done this to their parents’ resting place.”

As he spoke down the road from the Rajapaksa estate, Mr. Gamage was waiting for the electricity to come back on so he could complete a welding job. Such struggles are the one thing that unites supporters and opponents of the Rajapaksas amid the economic crisis.

Padma Wijeyawickrama, 53, has been making and selling curd for over 20 years in Hambantota. While her husband is out grazing their 15 cows, the mother of two stacks the clay pots of curd at her feet on her scooter and drives to the town market to sell them.

Before the economy crashed, she would sell 30 to 40 pots a day. That number has since dropped to about 20, as people have saved for other necessities. Most days in recent weeks, she has come back with half of her stack of 15 unsold.

“This is the hardest time we have faced,” she said.

The loss in income has meant a change in diet: Their meat consumption has gone down from three or four times a week to once. During her grocery trips, she can buy only half of what she did in the past.

She was clear about who was to blame: the Rajapaksas.

A crowd at a gas station near Mahinda Rajapaksa’s residence.
“This is the hardest time we have faced,” said Padma Wijeyawickrama, who has been making and selling curd for over 20 years in Hambantota.

The youngest member of Sri Lanka’s Parliament in 1970, he was seen as a “political artist” who could cast himself as both a man of the people and an assertive leader.

But in recent years, age and illness seemed to be catching up with Mr. Rajapaksa. That exposed a fact that the post-civil war triumphalism and lavish spending had papered over: He and his family were inexpert stewards of the government, especially on economic issues.

“If you are investing in debt, you should really be looking at return — and quick return. You can’t do all your long-term, hard infrastructure projects on debt,” said Eran Wickramaratne, a former banker turned state minister of finance. “We completely overleveraged ourselves, and the returns are not there.”

When the Rajapaksas were out of the government from 2014 to 2019, Mr. Wickramaratne said, officials found that the reckless spending had worsened the longstanding structural problems of Sri Lanka’s economy: a budget deficit and a balance-of-trade shortfall.

A banner outside a Hambantota hospital calling for the arrest of Rajapaksa supporters who attacked protesters.
K.G. Gamini Srianand, the mayor of Hambantota, said the Rajapaksas’ large projects had accomplished little.

With their power consolidated, they announced broad tax cuts — rapidly undoing the work of aligning Sri Lanka’s spending more with its means — and made a disastrous decision to ban chemical fertilizers in hopes of turning the country toward organic farming.

“The present crisis, I would say, is a crisis of governance,” Mr. Wickramaratne said. “The twin deficits we have always had — it’s just that the governments have managed it.”

The effects of the economic mismanagement are evident across Hambantota.

At the airport, which for a time was used to store grain, the only outsiders are the crews of occasional cargo flights, or groups of curious villagers on tours to see the complex. The cricket stadium, where the scoreboard clock is stuck in some afternoon past, was at one point rented out as a wedding venue to produce some revenue. It has a capacity of 35,000, more than the town of Hambantota’s entire population, 25,000.

K.G. Gamini Srianand, 68, the mayor of Hambantota and a member of the Rajapaksas’ party, said that Mahinda Rajapaksa had done more than any of his predecessors to develop the district.

“But these megaprojects were meaningless,” he said. “This region still has elephants crossing the roads, and people are still cultivating paddy as a livelihood. So these projects were unnecessary.”

Kanchana Niroshani, 47, a neighbor and friend of Ms. Wijeyawickrama, the curd seller, echoed the mayor’s view that the Rajapaksas’ legacy in Hambantota was not all bad.

“They did a lot — they won the war, they built roads,” Ms. Niroshani said.

But what about economic hardship, Ms. Wijeyawickrama asked.

Ms. Niroshani’s husband works at a leasing company whose customers have dwindled, and the family’s paddy yield fell by half this year because of the chemical fertilizer restrictions.

“The fertilizer ban really affected us badly,” she said, nodding in agreement with her friend. “In a few days it may be that we have nothing to eat.”

Farmers in Hambantota, and across Sri Lanka, were hurt by the Rajapaksas’ ban on chemical fertilizers.
Tags
Mahinda Rajapaksa Sai̇d Sri̇ Lanka That Who

The Stunning Grandeur of Soviet-Era Metros

In Wuhan, China, the anniversary of the world’s first lockdown passes quietly.