“Vesti Nedeli,” the flagship weekly roundup of Kremlin-controlled television news, recently portrayed a long history of predatory Western powers coming to grief when they invaded Russia: Sweden in the 18th century, France in the 19th, Germany in the 20th.

Enemies now seek to reverse those losses, said Dmitry Kiselyov, the show’s host, blaming the West for the war that Russia instigated in Ukraine. The goal to finish off Russia is “centuries old and unchanging,” he said. “Here we are on the defensive.”

In the six months since Russia invaded, the state media’s emphasis in reporting the war has gradually shifted. Gone are predictions of a lightning offensive that would obliterate Ukraine. There is less talk of being embraced as liberators who must “denazify” and demilitarize Ukraine, though the “fascist” label is still flung about with abandon.

Instead, in the Kremlin version — the only one most Russians see, with all others outlawed — the battlefields of Ukraine are one facet of a wider civilizational war being waged against Russia.

The reporting is less about Ukraine than “about opposing Western plans to get control of Mother Russia,” said Stanislav Kucher, a veteran Russian television host now consulting on a project to get Russians better access to banned news outlets. The United States is the main antagonist, with Europe and NATO its lackeys.

Vladimir Solovyov, a talk-show host and top cheerleader for President Vladimir V. Putin’s government, said this month that “Russia was invited to join Western society for dinner — not as a guest, but as a dish.”

One of his nightly shows recently presented the war as a kind of cosmic showdown between good and evil. For specific incidents, he brings out various “experts,” like the American-born one-time martial arts star Steven Seagal, now a Russian citizen, who pushed the Kremlin’s narrative that an explosion in July at a Russian internment camp in eastern Ukraine that killed more than 50 prisoners of war had been caused by American-supplied HIMARS rockets. Ukrainian and Western officials maintain that the evidence suggests the Russians planned an attack on the prison, including digging graves ahead of the explosion, and that the damage to the facility was inconsistent with a HIMARS attack.

On state media, Russia is a pillar of traditional values, bound to prevail over the moral swamp that is the West. There is a daily fixation with L.G.B.T.Q. matters. To watch Russian television is to get the impression that the gay community runs the decadent Western world. For all their professed shock and horror, Russian news outlets avidly air footage with lurid depictions of gay life.

The talk show host Vladimir Solovyov has said, “Russia was invited to join Western society for dinner — not as a guest, but as a dish.”Credit…James Hill for The New York Times

One of the most popular talk shows reported on a mischievous petition recently posted on the Ukrainian presidential website calling for the replacement in Odesa of a statue of Empress Catherine the Great with one of Billy Herrington, an American gay adult film star with a cult following, who died in 2018. The Russian show illustrated the story with clips of Mr. Herrington wearing only Speedo-like briefs and wrestling with another muscular, similarly clad man in a locker room.

The extent of Russia’s staggering casualties in Ukraine remains veiled in Russian news media; only the Ukrainian military suffers extensive losses. Ukrainian civilian suffering is all but invisible. There are emotional stories about individual deaths, though the reaction is not always what the Kremlin might have hoped for.

A recent story about Senior Sgt. Aleksei A. Malov, 32, a Russian tank commander killed in the fighting, did not mention how he died. Instead, it focused on how his parents had spent what Russians call “coffin money,” a death compensation paid by the government.

“We bought a new car in memory of our son,” the father said, adding that their first trip in their white Lada Granta was to the village cemetery.

The story, broadcast on “Vesti Nedeli,” caused an uproar. Critics of the war lambasted it as heartless, ham-handed propaganda, while supporters lauded the piece as illustrating how ordinary Russians endorse the conflict despite the toll.

State television has played down the mounting Ukrainian attacks on the strategically and symbolically important Crimean peninsula, but the images on social media of antiaircraft fire erupting over Crimea began to put domestic political pressure on the Kremlin to act. The visceral reality of the war, especially the fact that Russian-claimed territory was not immune, was brought home both by the strikes on Crimea and by what investigators called a premeditated assassination in Moscow.

Daria Dugina, 29, the daughter of a famous nationalist and herself a hawk, was killed by car bomb late Saturday, with official news outlets blaming Ukraine and its Western backers.

RT, a state-run television network, quoted Zakhar Prilepin, a conservative novelist and Ukraine war veteran, as saying that the West had “habituated” Ukraine to such actions. Various regular commentators on weekday political talk shows took to social media to demand that the Kremlin be tougher against Ukraine.

Glimpses of the war’s cost, however, remain the exception, as news and talk shows have branched into myriad economic and social topics to try to hammer home the idea that Russia is locked in a broad conflict with the West, noted Francis Scarr of BBC Monitoring, who spends several hours daily watching Russian television.

Official news media blame the Western arms shipped to Ukraine for prolonging the fighting, while insisting that those weapons are not very effective.

Reports rarely mention the pain inflicted on Russia by Western sanctions, which are universally dismissed as impotent. Rather, they tell how sanctions hurt Westerners far more.

The idea that the West cannot live without Russia crops up repeatedly. Pundits gleefully predict that losing access to Russian gas will cause an energy crisis in Europe, with consumers unable to pay soaring energy bills foisted upon them by uncaring politicians.

“Right now, hundreds of millions of Europeans face a harsh, cold winter, which Europe is unlikely to survive,” Yevgeny Popov, a host of the political talk show “60 Minutes,” said recently.

Domestic issues take a back seat to external matters, which was true even before the invasion. On Aug. 9, explosions rocked a Russian air base in Crimea, the most brazen attack on the occupied peninsula since the war started, killing at least one person and causing significant destruction, including no fewer than eight warplanes.

A family from the separatist-held territories of eastern Ukraine watching Mr. Putin in Russia in February. The extent of Russia’s staggering casualties in Ukraine remains veiled in Russian news media.Credit…Sergey Ponomarev for The New York Times

Lev Gudkov, the research director at the Levada Center, an independent polling organization, noted that at the start of the war, television had long been a trusted, main source of information for 75 percent of Russians. The trust has since dipped, he said, after it became clear that what the Kremlin calls its “special military operation” in Ukraine would not be a cakewalk.

The older, mainstay television audience, however, is especially susceptible to anti-NATO, anti-American rhetoric, he said, because it was drilled into Russians as schoolchildren, and the idea of rebuilding the might and reach of the Soviet empire appeals to many.

Over the long haul, analysts note, the Russian propaganda playbook offers little that is new, though the particulars change over time. Throughout the Soviet era, alarms that Western powers were bent on undermining Russia — often true — were standard fare, as were claims that those powers were crumbling.

The government explains European and American hostility by saying, according to Mr. Gudkov, that “Russia is getting stronger and that is why the West is trying to get in Russia’s way,” part of a general rhetorical line he described as “blatant lies and demagogy.”

As state television stokes confrontation, the talk show warriors are getting “angrier and more aggressive,” said Ilya Shelepin, who broadcasts a Russian press review on YouTube for the opposition organization founded by the imprisoned Kremlin critic Aleksei A. Navalny.

Sometimes accusations leveled against foreign adversaries are downright bizarre. The newspaper Kommersant recently quoted Russian lawmakers as saying that some Ukrainian soldiers were subjected to American biological experiments that turned them into “cruel and deadly monsters.” A Russian scientist quoted in the story dismissed the claim as far-fetched.

The remains of Russian armored vehicles on a road near Dmytrivka, Ukraine, in April. The word “war” has been banned in Russian news reports.Credit…Ivor Prickett for The New York Times

Reports from eastern Ukraine inevitably depict life under Russian control as constantly improving. When news anchors cut to a live report from the front lines, the most common question is “What successes do you have to report today?” noted Mr. Scarr, of BBC Monitoring.

“There is an automatic spin on it,” he said. “They always talk about Russian successes and Ukrainian failures.”

The Kremlin has not updated the Russian death toll it gave at the end of March, 1,351; U.S. officials recently estimated the number at 20,000. There are only scattered reports about heroic deaths of individual soldiers like Sergeant Malov.

Those appalled by the report called it a crude attempt to underscore the financial benefits for the relatives of troops dying at a time when Russia is struggling to find enough soldiers. The episode was removed from the program’s online archives.

Marina Akhmedova, a Kremlin-allied journalist, suggested on Telegram that detractors were out of touch with most Russians’ reality.

“Not everyone is rich enough to escape to Europe and to eat pain au chocolat in the morning,” she wrote. “For many people, a Lada is essential, as is the fact that they can get to the cemetery to talk to their son.”

That one reads, “Thank you, grandpa, for the victory.”

Where the Wall of Death Is a Way of Life 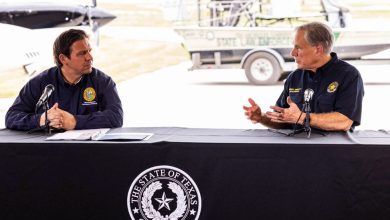 The Megastate G.O.P. Rivalry Between Abbott and DeSantis

How the ‘Djokovic Affair’ Finally Came to an End