Good morning. We’re covering the fallout over the death of an Al Jazeera journalist in the West Bank, a possible NATO expansion and a Covid outbreak in North Korea. 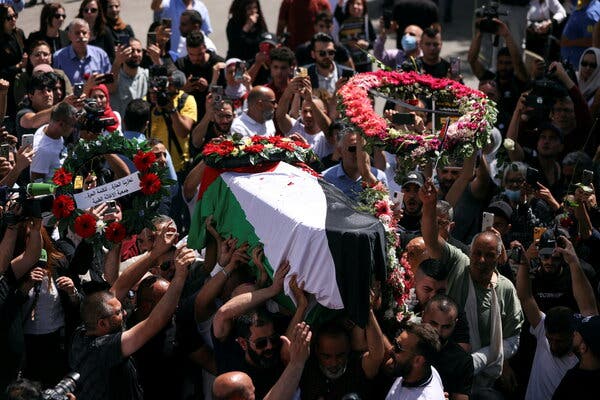 Who fired a fatal bullet?

The bullet that killed the Al Jazeera journalist Shireen Abu Akleh has become the central point of contention between competing efforts by Israelis and Palestinians to investigate who shot her.

Palestinian officials said that Israel could not be trusted to investigate the killing, and would not let Israeli officials examine the bullet. As Palestinian investigators combed the area where Abu Akleh was killed, a top official rejected Israeli calls for a joint inquiry, and accused Israeli soldiers of killing her.

Israeli officials maintain that she may have been hit by Palestinian fire, and they said that they would need to examine the bullet to see if it could be matched to an Israeli rifle. They argued that Palestinians were refusing to provide the bullet in order to obscure its origin. Here are live updates.

Explanation: The bullet could reveal the gun that fired it, and its condition may contain signs about the direction and distance it was fired from. Israel said both sides fired M16s, which could complicate the investigation.

Background: Abu Akleh, a Palestinian American journalist, had been reporting in the occupied West Bank during an Israeli raid, amid weeks of violence. Palestinian officials have conducted an autopsy but have yet to release their findings.

Funeral: Palestinians gathered in Ramallah, the authority’s administrative hub in the West Bank, for her funeral procession.

Will the war in Ukraine expand NATO?

Russia’s war is posing a paradoxical diplomatic test for its president, Vladimir Putin: Long-neutral Finland and Sweden are considering joining the NATO alliance, a key Western tie that Putin has sought to fracture.

On Thursday, Finland’s prime minister and president announced their support for joining NATO. Parliament is expected to vote on Monday, and NATO’s secretary general promised Finland a “smooth and swift” accession process.

The move is a remarkable shift: Finland, which has a long history of military nonalignment, says it is prepared to fight. Sweden, Finland’s strategic partner, has been neutral for more than 200 years. Both countries are moving toward applying to join NATO, perhaps within days. Here are live updates.

Analysis: The Scandinavian shift also poses a question for other NATO allies: Why not Ukraine?

Russia: The Kremlin said that Finnish membership in NATO was “definitely” a threat, and that it was prepared to “balance the situation” to ensure Russia’s security.

The West: It could take a year or longer for Finland and Sweden to join NATO, leaving them vulnerable to Russian retaliation in the meantime. Prime Minister Boris Johnson of Britain sought on Wednesday to fill that gap, committing to defending the countries if they were attacked.

An undated photo released by state news shows Kim Jong-un convening what it said was a Workers’ Party meeting on the outbreak.Credit…Korea Central News Agency, via Reuters

The country ordered a nationwide lockdown over what it called its first Covid outbreak and declared a “maximum emergency.” The danger is great: Almost all North Koreans are unvaccinated, save, perhaps, for a handful of elites.

The economic toll could also be severe. North Korea has already been hit hard by years of U.N. sanctions and its decision two years ago to close its border with China, its only major trading partner, to prevent the spread of the coronavirus.

An expert said that the North “could face a serious food crisis and the kind of great confusion we have seen in China recently,” referring to the severe difficulties created by the draconian restrictions recently imposed on Shanghai and other major cities.

Weapons: The outbreak could also affect efforts by the North’s leader, Kim Jong-un, to expand his nuclear arsenal. But hours after the announcement, the North launched three ballistic missiles, South Korea said. The North’s leaders may use missile tests to boost morale, an expert said.

A greenhouse at one of the first farms in Thailand to grow medical marijuana with official permission.Credit…Lauren Decicca/Getty Images

The first direct image of Sagittarius A*, the black hole at the center of the Milky Way.Credit…Event Horizon Collaboration/National Science Foundation

Several new horror movies and shows hinge on mothers, our critic Amanda Hess writes: “Their stories signal that there is something psychologically harrowing about the role of motherhood itself.”

Finland and NATO. Finland’s leaders announced their support for the nation to join the alliance, while Sweden is expected to do the same within days. The Kremlin said that Finland’s possible accession was “definitely” a threat and that it would “take necessary measures” to protect itself.

American aid. The House voted 368 to 57 in favor of a $39.8 billion aid package for Ukraine, which would bring the total U.S. financial commitment to roughly $53 billion over two months. The Senate still needs to vote on the proposal.

Russian oil embargo. European Union ambassadors again failed to reach an agreement to ban Russian oil, because Hungary has resisted the adoption of the embargo. The country is preventing the bloc from presenting a united front against Moscow.

The “da Vinci” Stradivarius, from 1714.Credit…Andrew White for The New York Times

For the first time in decades, a Stradivarius from the early 1700s — considered the “golden period” of violin making — will be up for auction.

The Stradivarius, known as the “da Vinci,” was the instrument of choice for Toscha Seidel, who bought it for $25,000 in 1924. (The sale made the front page of The Times.) Seidel was quite famous: He had a weekly broadcast on CBS in the 1930s and gave lessons to Albert Einstein. He played the “da Vinci” on some celebrated film scores, including “The Wizard of Oz.”

Seidel, who died in 1962, treasured the violin and said he wouldn’t trade it “for a million dollars.” When the auction ends next month, it could fetch as much as $20 million.

Pistachios add color and crunch to this rich and creamy bucatini.

In “What Artists Wear,” a British fashion journalist and art curator looks at clothes as protection, performance and resistance.

“The Village House” follows an Indian family over two decades. “In lieu of plot,” our critic writes, “the film accumulates rituals, traditions and memories, and charts a larger arc of familial change and rural emigration.”

P.S. Jim Dao, The Times’s Metro editor, is leaving to become the editorial page editor of The Boston Globe. We will miss him.

The latest episode of “The Daily” is about inflation in the U.S.

‘I’m a Soldier Now.’ Even in Untouched Villages, Ukrainians Prepare to Fight

Salzburg is poised to impose a general lockdown as Covid spreads in Austria.

The Rush for a Slice of Paradise in Puerto Rico