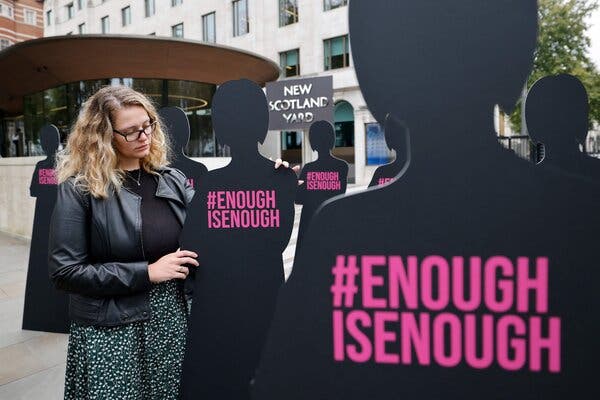 Amid a national outcry in Britain over gender-based crimes, including the murder of Sarah Everard by a London police officer, the public discourse has turned to a new question: Should misogyny be considered a hate crime?

Activists, criminal justice experts and opposition lawmakers say the definition of a hate crime should be expanded to ensure greater punishment for crimes such as harassment, domestic abuse and stalking, and to signal the seriousness of these offenses. But the government has so far ruled that out.

Boris Johnson, the British prime minister, said that the legislation currently in place was “abundant” but not being properly enforced. “Widening the scope” would increase the burden on the police, he said. Already, activists have pushed back. “When did we ever take the scale of a problem as a reason not to act on it?” asked Ruth Davison, the chief executive of the charity Refuge.

By the numbers: One in four womeninBritain have experienced sexual assault, according to government statistics. Almost one in three women will face domestic abuse in their lifetime. And, on average, a woman is killed by a man every three days in the country, with many cases involving domestic violence.

Flooding in Waverly, Tenn., in August.Credit…Houston Cofield for The New York Times

President Biden hopes to fortify the U.S. against extreme weather and cut the country’s carbon dioxide emissions at least 50 percent below 2005 levels by 2030. But his plan is embedded in two pieces of legislation pending on Capitol Hill. The future of both bills remains in question, with tension among Democrats over the size and scope of many details.

Together, the bills contain what would be the most significant climate action ever taken by the U.S., touching a broad cross-section of American life. Because Democrats could lose control of Congress after 2022 and Republicans have shown little interest in climate legislation, it could be years before another opportunity arises — a delay that scientists say the planet cannot afford.

Biden’s ambitions to reduce U.S. emissions are constrained by razor-thin Democratic majorities. The first piece of legislation, a $3.5 trillion budget package, has been a focal point of debate because it is filled with social programs across health care, education and family leave. The second, a $1 trillion infrastructure plan, has bipartisan support and would help prepare communities for extreme weather fueled by climate change that is already underway.

Quotable: “Each time you let these opportunities slip through your fingers, you’re passing a much harder problem on to the next generation,” said Kim Cobb, a climate scientist at the Georgia Institute of Technology. “It’s a very hard thing to swallow that we are relegating children born today and not yet born to a future of dangerous climate impacts.”

Details: The climate provisions are designed to quickly transform energy and transportation, the country’s two largest sources of greenhouse gases, from systems that now mostly burn gas, oil and coal to sectors that run increasingly on clean energy from the sun, wind and nuclear power.

Downtown Tunis in September.Credit…Ivor Prickett for The New York Times

‘The Arab Spring will continue’

In the decade since Tunisians toppled their dictator, the revolution’s high hopes have curdled into political chaos and economic failure. On July 25, Kais Saied, Tunisia’s democratically elected president, froze Parliament and fired the prime minister, vowing to attack corruption and return power to the people.

It was a power grab that an overwhelming majority of Tunisians greeted with joy and relief, though it has made it harder than ever to tell a hopeful story about the Arab Spring. Held up as proof that democracy could bloom in the Middle East, Tunisia now seems a final confirmation of the uprisings’ failed promise. Elsewhere, wars that followed the uprisings have devastated Syria, Libya and Yemen, and autocrats smothered protest in the Gulf.

Tunisians recently flooded the streets again to demonstrate for Saied — and against democracy. “The Arab Spring will continue,” predicted Tarek Megerisi, a North Africa specialist at the European Council on Foreign Relations. “No matter how much you try to repress it or how much the environment around it changes, desperate people will still try to secure their rights.”

First person: Many Tunisians say they wonder whether their country would be better off with a single ruler, one powerful enough to just get things done. “I ask myself, what have we done with democracy?” said Ali Bousselmi, the co-founder of a gay rights group, pointing at ongoing problems with poverty and government corruption.

In Kigali, the Rwandan capital, milk bars are a popular place to come together, reminisce about rural life and enjoy a favorite national drink.

“When you drink milk,” said a motorcycle taxi driver, who drinks at least three liters daily, “you always have your head straight and your ideas right.”

For the past few months, the notebooks of the food writer Dorie Greenspan have collected on a big worktable in her basement. Some have stories that go on for pages; others have a single word, and then a stretch of silence, she writes. “They’re fragments from every part of my adult life, not journals — they’re too disjointed to be called that — but vignettes that often spark a memory and sometimes don’t.”

In some instances, “what if” mutterings and notes jotted down in a hurry have spawned something delicious — baking flavored with gin inspired by a Bee’s Knees cocktail, say, or waking from a dream of a cookie topped with jam and streusel.

More recently, a dinner of salmon with a miso-maple syrup glaze begot a loaf cake sweet enough to be called cake, but savory enough to be equally good with Cheddar or warm jam. “The miso and maple syrup mellowed when they were mixed with other ingredients and given time in the oven, just as I hoped they would,” Dorie writes.

The salmon dinner didn’t make it into the notebook, but the cake did: “If I owned a bed-and-breakfast, I’d make this my signature.”

Read more about the development of a very special loaf.

This simple chicken dish, adapted from Peg Bracken’s “The I Hate to Cook Book,” is as no-fuss as you’d expect.

The symphonies and études of Louise Farrenc, a 19th-century composer, are returning to a prominence some argue she has always deserved.

In “Concepcion,” Albert Samaha writes about his family across the generations, from its roots in the Philippines to its move to the U.S.

Here’s today’s Mini Crossword, and a clue: James Bond, for one (three letters).

That’s it for today’s briefing. And a correction: Friday’s briefing misspelled the given name of Ireland’s prime minister. He is Micheal Martin, not Michael.

P.S. The word “ooooooof” — some economic experts’ reaction to the latest U.S. jobs numbers — appeared for the first time in The Times.

The latest episode of “The Daily” is on an explosive admission from the C.I.A.